Topic Progress:
← Back to Lesson

Who is Who in the Team?

“The team is not a bunch of people with job titles, but a congregation of individuals, each of whom has a role which is understood by other members. Members of a team seek out certain roles and they perform most effectively in the ones that are most natural to them.”         ———- Dr. R. M. Belbin

Belbin Team Roles are used to identify people’s behavioural strengths and weaknesses in the workplace. This information can be used to: 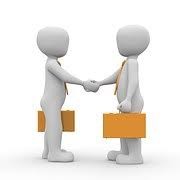 Belbin Team Roles measure behaviour, not personality, and so can be defined as tendency to behave, contribute, and interrelate with others in a particular way.

The Team Roles that Dr Meredith Belbin identified, are used widely in thousands of organisations all over the world today. By identifying the Team Roles, it can be ensured that an individual’s best strengths can be used to advantage and that the weaknesses are managed as best they can be.

1. Plant: These individuals were ‘planted’ in each team. They tend to be highly creative and good at solving problems in unconventional ways.

2. Monitor: Evaluator One by one, the other Team Roles began to emerge. The Monitor Evaluator was needed to provide a logical eye, make impartial judgements where required, and to weigh up the team’s options in a dispassionate way.

3. Coordinators: Coordinators were needed to focus on the team’s objectives, draw out team members, and delegate work appropriately.

5. Implementers: Implementers were needed to plan a practical, workable strategy and carry it out as efficiently as possible.

7. Team Workers: Team Workers helped the team to gel, using their versatility to identify the work required and complete it on behalf of the team.

8. Shapers: Challenging individuals, known as Shapers, provided the necessary drive to ensure that the team kept moving and did not lose focus or momentum.

9. Specialist: It was only after the initial research had been completed that the ninth Team Role, Specialist, emerged. In the real world, the value of an individual with indepth knowledge of a key area came to be recognised as yet another essential team contribution.

During his research, Belbin found that each of the behaviours were essential in getting the team successfully from start to finish. The key was balance. For example, Meredith Belbin found that a team with no Plants struggled to come up with the initial spark of an idea with which to push forward. However, once too many Plants were in the team, bad ideas concealed good ones and non-starters were given too much time. Similarly, with no Shaper, the team ambled along without drive and direction, missing deadlines. With too many Shapers, in-fighting began and morale was lowered.

As well as the strength or contribution they provide, each Team Role also has an associated allowable weakness: a flipside of the behavioural characteristics, which is allowable in the team because of the strength which goes with it.

• Plants could be unorthodox or forgetful

• Resource Investigators might forget to follow-up on a lead

• Monitor Evaluators could be overly critical and slow moving

• Coordinators might over delegate leaving themselves little work to do

• Specialist may have a tendency to focus narrowly on their own subject of choice.

Recognise, Acknowledge and Contribute to Formation and Achievement of Team Objectives

Contribute to the Formation and Achievement of the Team Objectives

Objectives are those specific steps that enable you to accomplish a goal. Setting objectives involves a continuous process of research, decision-making, evaluation, measurement, and realignment. Knowledge of yourself and your team is a vital starting point in setting objectives.

Managers are required to get specific tasks done by their team. To do this effectively, the team members must understand their individual contributions to the activity. This means that each individual has to have his or her own specific objectives and how these objectives assist in supporting the team to meet its objectives.

One benefit of clear and precise objectives comes when a manager and you sit down for an appraisal review. With clear objectives, the discussion of past performance is more specific and will leave time to review and revise objectives for the coming period and to discuss career aspirations. It is imperative that you are a part of defining your objectives, so you recognise your responsibilities. The effort between you and your manager to define these objectives is critical.

Both participants must view the supervisor and employee dialog as central to the setting objectives process. Both entities must recognise that they, together, are the main beneficiaries of the process, not the system, not the company, not upper management, not the human resources department.

The process also ensures thorough understanding of what is expected. Setting objectives achieves a clear and concise understanding of how work will be measured and evaluated, enabling the employee to evaluate their own performance during the appraisal period, and make adjustments as necessary.

Recognise and Respond Positively to Conflict Within the Team

We discussed earlier the importance of maintaining a positive attitude. When faced with conflict, it is even more important. Conflict is not bad – unless it is ignored or badly managed! 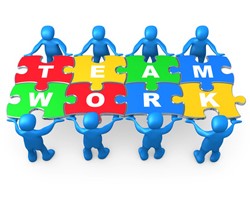 Staying off the Destructive Track

Blaming someone else does nothing to solve the problem. Remember that blaming will definitely build unhealthy tension in a team.

• Considering Only Your View

When you show little interest in considering someone else’s view, you only increase the anger and resentment which stops out any prospects of settling debate.

Personal insults and bad language do not help at all in resolving a conflict.

These sound like, “I’m going to get you,” or “This way or else!” Such outbursts intimidate some people, turn off others, and they’re not exactly the best way to promote good teamwork.

Justifying your action instead of listening to what someone else is trying to tell you builds a wall between you and the other party, making agreements nearly impossible to achieve.

Running away from the problem and hoping that it goes away — avoidance at its best — seldom resolves an issue.

• Beating Around the Bush

Attempting to address the concern at hand but then rambling and talking around the point simply clouds the issue so much that it’s left unaddressed.

• Telling Others and Not the Source

Complaining to others about what someone else has done and not talking directly to that person is a great way of stirring divisiveness on a team. Many people place this behaviour at the top of the destructive-behaviour list.

This means blaming and complaining electronically about the source of your concern and not talking directly to that person. Sometimes the perpetrator makes this unacceptable behaviour even worse by copying others with the disruptive email.

Making assumptions about another person – and, of course, assuming the worst – is not a great frame of mind for dealing with team members about your concerns.

Running on the Constructive Track

Because disagreements and differences are inevitable with teams, your best strategy is encouraging team members to learn behaviours that help them work through conflicts and maintain respectful working relationships in the process. If you want to realise the benefits that can come out of conflicts (creativity, richer solutions, stronger teamwork), put these constructive behaviours into practice:

Being in control of your own emotions is where you begin when you’re working out a concern with another person. Venting your frustration, spewing your anger, or throwing sarcastic barbs only shows that you’re out of control and prevents you from inviting the cooperation of others.

• Be Direct, Factual, and Sincere

You have to express your concern or problem clearly and constructively so that others understand where you’re coming from. Getting to the point, stating the facts as you know them, and speaking with candour and respect are the best ways of getting to a point constructively and increasing the likelihood that you’ll be heard the way you want to be heard.

• Go to the Source

A conflict is best resolved by addressing it face-to-face with the other party. Telling a third party or communicating by email cannot replace the person-toperson conversation that’s required for conflict resolution to work. Despite the discomfort you may feel with this direct method, a good old-fashioned talk still is the tried-and-true method for resolving conflicts.

• Get into Problem Solving

Active listening is all about showing that you care and are working to understand what someone else is saying and what that person truly means. Understanding that efforts to actively listen are greatly needed during conflict situations isn’t difficult. Those efforts are greatly needed so that the parties can work out their concerns.

• Assume that the Other Person Means Well

This assumption is the safest that you can make when you’re working with someone else, especially when you’re dealing with a conflict. When you assume that the other person means well, you don’t have to worry that someone’s out to get you. You’re free to deal with the actions and issues at hand. What a relief!

Here are some steps for providing effective feedback that, if done correctly and consistently, will move your team members to a higher level of productivity and effectiveness. The key is that you need to be consistent or you won’t get results. Remember, you won’t see changes overnight. Change generally happens incrementally and not all at once.

There are six general rules for providing effective feedback.

1. State facts or observations you have noticed and your concern about this behaviour.

2. Explain the impact the negative behaviour has on you.

3. Ask for the other person to explain their view of the situation and use as many questions or question-like statements as possible to get their perspective. Example: “I’d like to understand what caused you to cut Jim off so many times.” “Please tell me more…” “How do you think it made Jim feel?”

4. Once the employee understands the impact their behaviour has on their performance and others around them, coach the person to their own solution. Example: “So what technique could you use that will stop you from interrupting?” “What else could you use?”

5. Get commitment on a SMART Goal from the employee. A SMART Goal is a Specific, Measurable, Achievable, Realistic, and Time bound goal. Example: “What solutions are you committed to trying?” “When will you try it?” “How will you know that you have been successful”

6. Set a specific time for a follow-up discussion.

Now that you know the steps for effective feedback, when are you going to start the process? The sooner you start, the sooner your team will become more productive and effective. And this means greater profits and a more engaged workforce. 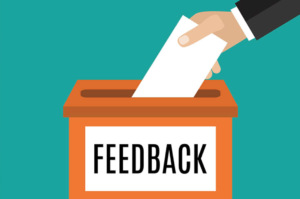 • Achievements and contributions to the team objectives by team members must be recognised, acknowledged

• Conflict should be recognised and responded to positively within team